The co-chairs of the Panel on Peace and Security of Northeast Asia (PSNA), an independent group of experts established under the Research Center for Nuclear Weapons Abolition, Nagasaki University (RECNA) today published a new paper which supports the recommendations and analysis in the Pandemic Futures and Nuclear Weapon Risks report.

Let Nagasaki be the last!

Co-Chairs, Panel on Peace and Security of Northeast Asia (PSNA)

The COVID-19 pandemic exposed the failure of nation-states and international institutions to manage global risks—including economic recession, border closures, vaccine competition, and shifts in military behavior—that could heighten the risk of nuclear disaster in the years to come. COVID-19 has also introduced new dynamics: it has already infected three supreme nuclear commanders, has afflicted nuclear command and control organizations, and may ravage nuclear and conventional forces, thereby destabilizing nuclear-prone conflicts at a time when tension should be reduced, not increased. The threat of nuclear war is particularly urgent in the Northeast Asia region, the locus of multiple simmering conflicts.

In October-November 2020, RECNA-Nagasaki University and APLN with support of Nautilus Institute convened the Nagasaki 75th Anniversary scenarios workshop to address the pandemic-nuclear nexus. [1] About fifty participants of diverse background explored the future of nuclear war and nuclear disarmament in light of the uncertainty created by the global coronavirus pandemic. Their specific task was to develop four scenarios framed by the relative power of national governments versus non-state actors on the one hand, and fragmented versus collaborative approach to global risk on the other, to answer the focal question:

What are the opportunities driven by global pandemics for Northeast Asian governments, civil society, and market actors to reduce nuclear risk and resume nuclear disarmament?

In summary, the four scenarios were: 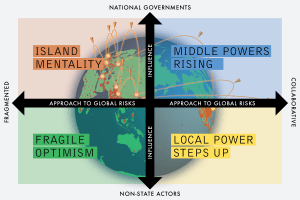 Reflecting Nagasaki’s voice—Let Nagasaki be the Last! — the workshop recommended sixteen urgent steps that could be implemented globally and in particular, in Northeast Asia, to mitigate the rising threat of nuclear war in the era of pandemics.

Reflections on Applicability of the Scenarios and Recommendations to Northeast Asia

Although global, each of the scenarios have special relevance and implications for the Northeast Asian region, and complement current PSNA policy initiatives.

The Middle Powers Rising scenario, for example, highlights the need to expand the UN Security Council to include more middle-level powers. There are currently no Northeast Asian countries on the Council, and this suggests the need for new strategies and initiatives to expand or ensure regional Northeast Asian membership of the Council, particularly in view of its critical role in dealing with regional crises in a timely way.

The Local Powers Step Up scenario envisions how cities and provinces develop new communication structures and platforms for city and regional leaders to share best practice on various ways to meet the new existential risks, whether pandemics, climate change or nuclear—a potent strategy for cities such as Nagasaki and Seoul to undertake in partnership, especially if they make common cause with non-state actors such as companies and civil society to practice civic diplomacy for nuclear disarmament.

The Fragile Optimism scenario identifies the need to explore new opportunities outside of direct government roles for ways of softening ties with North Korea—which may be critically important in the post-Trump era. More specifically, in the case of North Korean proliferation, the Scenarios Report identified the need for civil society actors, including cities and regional governments in South Korea and other Northeast Asian regions, to play a greater role in fostering negotiations with North Korea, particularly through new initiatives and incentives, both economic and cross-cultural. This is a level of action that PSNA could seek to advocate, particularly in the context of pursuing a regional Northeast Asian nuclear-weapon-free zone.

Although women constituted more than fifty percent of the participants in the scenarios workshop, there were no specific recommendations concerning gender.[2] All of these scenarios present an urgent need to elevate the role of women and to increase cultural and generational diversity into decision-making at all levels.

PSNA was created to advocate for a concept of comprehensive security in Northeast Asia.  In this vein, the Report suggested nuclear-free-zones, and nuclear-disarmament norm-setting as exemplified in the UN Treaty on the Prohibition of Nuclear Weapons.  PSNA might take these specific goals and push regional governments to Last! — jointly convene a regional conference to discuss and create a consensus at many levels on the need for a comprehensive security agreement for Northeast Asia, initiate a regional nuclear-weapon-free zone, and explore regional roles in implementing the new UN Treaty on the Prohibition of Nuclear Weapons.

The Island Mentality scenario–perhaps one of the more plausible of scenarios arising from the Trump era of hyper-nationalism and opposition to multilateralism, prompted a number of strategies aimed at assisting nations to manage and successfully address multiple simultaneous crises, especially in the case of pandemics and refugees from war and climate change.

A comprehensive security regional framework is essential to undertake such a task in a systematic manner, perhaps under the umbrella concept of “planetary health.”  To this end, a regional public health security initiative led by regional cities and first responders might be an effective way to initiate a comprehensive security institutional framework in this region, and might be an agenda that PSNA, in partnership with other networks in the region, might pursue.

Nuclear Hotline and a Regional Summit: Let Nagasaki be the Last!

The Scenarios Workshop, and some of the discussion papers that informed the Workshop, drew detailed attention to the threats of accidental, miscalculate or pre-emptive war as tensions between China and the United States and other states in the region increase and nuclear weapon states modernize their nuclear weaponry to include new forms of tactical weapons, and command and control systems that greatly reduce response times in nuclear crises.  As noted earlier, during pandemics, nuclear commanders might become incapacitated through infection or have their judgment affected. As the Workshop Report highlights, nuclear hotlines become vital in such circumstances if inadvertent nuclear war is to be averted. Given past and incipient tensions within Northeast Asia, both on the Korean Peninsula and in relation to Taiwan, and rapidly evolving nuclear weapon systems, establishment of such hotlines are needed as a matter of great urgency.   Advocating nuclear hotlines with each government in the region could be an important PSNA priority.

Of critical importance, the Report specifically called for slowing and reversing nuclear force deployments and operations in Northeast Asia as a policy step that could be taken not only by nuclear prohibition states but also regional states allied to nuclear weapon states. Irrespective of alliance relationships, it should be in all states’ interests to reduce the risks of nuclear war arising out of regional conflicts and crises.  A summit at which leaders would declare that nuclear weapon would never be used again in this region would be an important first step to reverse this dangerous dynamic by declaring Let Nagasaki be the last! as a precursor to adoption of a regional No-First Use common policy by the nuclear-armed states in this region.

[1] The full report of the workshop is RECNA-Nagasaki University, Asia Pacific Leadership Network, Nautilus Institute, “PANDEMIC FUTURES and NUCLEAR WEAPON RISKS”, posted December 16, 2020 by RECNA here, APLN here, and by Nautilus Institute here. The fifteen supporting expert papers on a variety of nexi between pandemics and nuclear risk and disarmament are listed in Appendix 1.

[2] 51% woman, 49% men, overall. This silence may be explained by a masculinist style still dominating in deliberations of the working groups; or, how the narratives themselves were shaped by women in ways that expressed how these issues are gendered—or both.