APLN member Feroz Hassan Khan published a book titled “Subcontinent Adrift: Strategic Futures of South Asia”. The following is a summary of the book. You can find more information at this link. 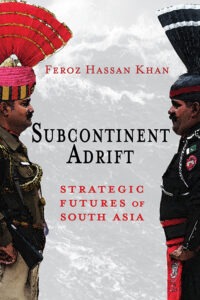 While several books have examined the security challenges faced by India and Pakistan in isolation as well as the strategies they have each adopted in response, Subcontinent Adrift places the two sets of clashing outlooks, policies, and strategies together and analyzes the causes and consequences of the drift in South Asia. Subcontinent Adrift maps out and explains India and Pakistan’s respective interests, motivations, and long-term objectives from a contemporary perspective. Much has happened in the intervening period since the nuclear tests in 1998 that has shaped the rivalry between these two countries, including advances in their strategic capabilities, domestic political shifts, and changes in the global balance of power. Hence the book considers to what extent the “drifting” Subcontinent is affecting the political, military, and economic dynamics on the international stage and causing a “global drift”—described by Chester Crocker as a “disorderly mixture of turbulence and drift in relationships among the leading powers and key regional states.”

This study identifies the latent and emergent drivers behind the mounting acrimony in South Asia—notably, India’s ambitions as a “rising power” coupled with the resurgence of China and Pakistan’s strategic anxiety as the United States unmoors itself from Afghanistan and embraces India. India is similarly concerned as China advances its Belt and Road Initiative (BRI) across the region, developing a network of economic and strategic hubs and bringing India’s neighbors into China’s embrace through its strategy of peripheral diplomacy. Countries in the region are attracted by the new opportunities offered through the BRI, which in turn undercuts India’s national objectives and provides new incentives for Pakistan to balance against India. Khan elucidates the intricacies of such external drivers vis-à-vis the internal factors of both countries and their ramifications in various scenarios.

Subcontinent Adrift will be a valuable addition to the fields of international relations, security studies, and Asian studies.

Balanced Leadership Needed for Peace on the Korean Peninsula

Unlocking the Potential of Nuclear-Weapon-Free Zones